How to Avoid a Rude Awokening! 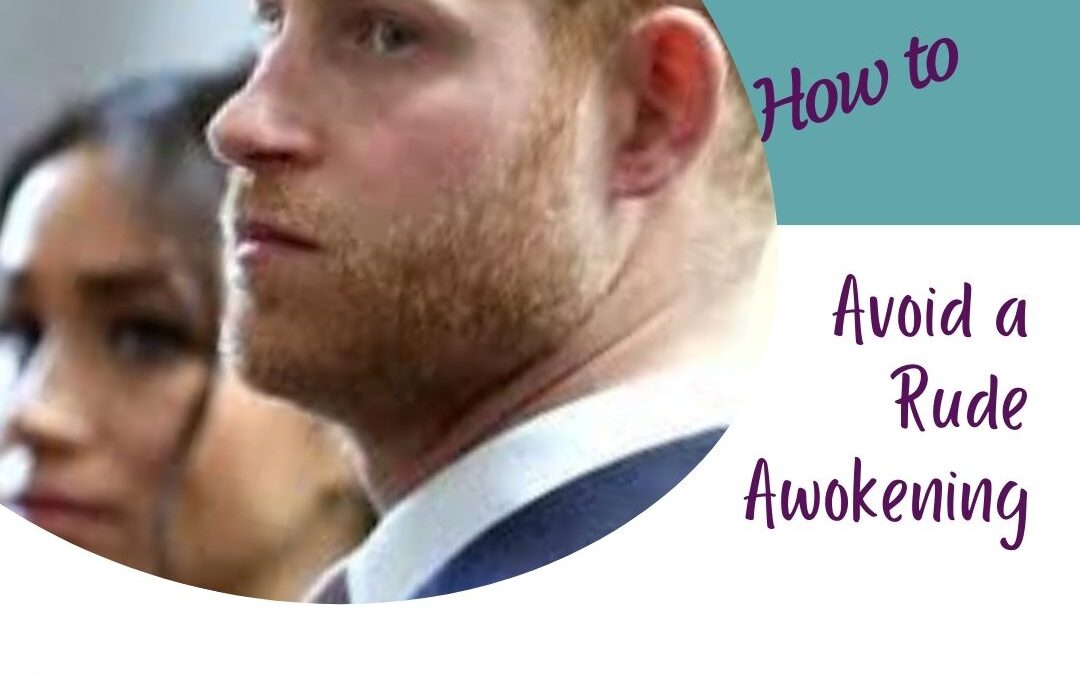 It’s hard to ignore the Royal Debacle unfolding on prime-time TV lately.  Harry and Meghan, or like my sister likes to call them Harry Markle, are two members of a much larger family. They might like to refer to them as the Firm, but they are indeed a family. And like the rest of us, families can be dysfunctional at times. Being American born, married to a Brit, this royal unrest has been discussed way too much at my dinner table. Whatever side you do take, lets break down the important message that you can take away from this and see how we can all learn to better appreciate your family along with the ones that you marry into.

Everyone is brought up with a set of unwritten and unspoken cultural mores within their family life. For some, these rules are more defined and clear cut – perhaps by religious beliefs but others are simply cultural or social, like watching Sunday Football in the US, or eating soup at every meal in Hungary. To a person living these norms you may never even notice the constancy. However, when you mix two cultures, your sensitivity to it becomes heightened.

When looking for a life partner, aside from chemistry, you begin to build a mental list of character traits that you find attractive. Throughout the dating process, you progress from date to date to eventually pairing off; Perhaps living together, meeting the family and finally marrying. What many forget is when you marry a person, you aren’t just marrying your partner but his/her family and everything that goes along with it. This is often an overlooked concept that can be detrimental to a fledgling marriage. Finding out that the family, and cultural norms that surround family life are drastically different from your own can often ignite mini scuffles, leading to bitterness and larger battles in the future.

Maybe in some cases, like Harry Markle, it leads to choosing one side of the family and Megxiting the other. No matter who you believe from the current interview , what can be understood is that Harry and Meghan were so unhappy in the royal family that they elected to sever their ties to the royal family. This is fact.  Under a magnifying glass, indeed it is hard to believe that Meghan Markle failed to know what she was signing up for. Her situation is a much more pronounced situation than us commoners as  the royal family has so many rules and obligations that are clearly written and passed down from one generation to the next. All potential newcomers are clearly informed of duty and protocols prior to their nuptials.

Furthermore, this wasn’t her first marriage. One would think that the issue of how families do things differently would have come up before and would have invited her to investigate this in her new family.

She might have felt trapped by the archaic rules, and cultures norms, but no one told her she couldn’t phone a friend, meet her future  sister- in- law for a cuppa, or even google the family- not many of us out there are as googleable as Meghans in-laws. God knows if I only knew some of the craziness I was marrying into, my marriage contract would’ve been several pages longer with multiple clauses forbidding certain disagreeable norms.

No one can fully appreciate their partner’s family until they enter it.

As a Marriage Therapist who has worked with hundreds of couples pre-and post-marriage, I highly recommend doing your research before you get married. The more you have in common with our partner from the get-go, the less friction there is bound to be. For instance, the Ultra-Orthodox world only permits their children to marry within the sect. This can be for this very reason, and certainly, how much “getting to know you” do they need? How many dates must they go on to figure out that this person is the right one. They already know the types of food they like to eat, what they do on a Saturday afternoon, how the wedding will be planned etc etc.

I’m reminded of the funny film, My Big Fat Greek Wedding which exaggerated this point and brought many discussions about inter-marriage to the table. Intermarriage, in the cultural sense, can be a very touchy subject but one that I think is often not discussed enough.

From what I’ve gleaned from the many couples I’ve worked with every family is like a world onto its own. With their own set of in-jokes, values, ways of approaching things and mores. I can still remember working with a couple who came from the exact same home-town who had completely different ideas about how to run a household. The couple mistakenly assumed that because they were coming from socially, culturally and religiously similar backgrounds that getting married would be simple and easy. Needless to say, making this assumption at the outset, set them up for many challenges going forward as they had to spend lots of time teasing through their many differences.

A friend laughingly once mentioned how beneficial it was that she, a Sephardic Jew of Moroccan decent, married an Ashkenazi man of European decent. She claimed he treated her like a princess and expected very little of her in terms of domestic chores. She claimed, had it been the other way around, him being Sepharic, she Ashkenaz, it would have been a rude awakening as her father always instilled a “man is king of the home” culture in his sons and his daughters and indeed his wife, were expected to wait on him and the sons. This may seem archaic, but she insists the notion lingers in her household.

If we aren’t informed of the cultural vibe, the religious norms, and social expectations of the family life prior to marriage then we only have ourselves to blame when we enter into a relationship and to find what we might call dysfunction another calls healthy, stable and completely normal.

Here’s a list of things you may want to consider knowing about the family you are marrying into to determine whether this is workable for you:

Too bad Meghan Markle didn’t speak with the right people who could advise her about her in-laws quirks. If she spoke to anyone in the UK in addition to the help and assistance of a qualified Marriage therapist, they probably could have informed her about quite a few things to be prepared for.

By understanding the ins and outs of how the family you are marrying into operates and how this compares with what you are used to, you will be well on your way to thinking about how to create your new unit together in a way that will work best for you and your partner as a couple unit and as your own family. Acknowledging family differences ahead of time and allowing yourself to be initiated into the new norm will smooth the way for any couple looking to starting their own family.