Are You Ready to Take a Relationship Risk? 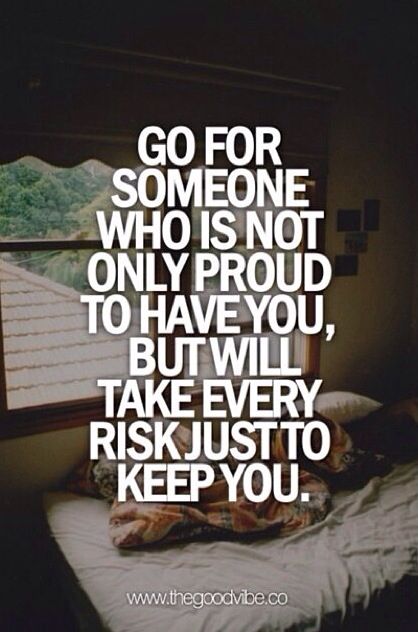 Yoni was dating a woman he felt very excited about. When they weren’t together, she lived in his mind all time. While commuting to work, at the business meeting, while working out at the gym, while showering just after the gym…Yoni thought about her so much, it freaked him out. He only recently started going out with this woman and already she was occupying so much head space.

Yoni was petrified about his feelings being found out. He was so overwhelmed by his feelings for her, it paralyzed him. It made him consider whether he could continue on like this. He wanted to tell her how he felt because at least it would be out there. What stopped him from tell her was his fear that his feelings wouldn’t be reciprocated, or that he would scare her off. And then he would be left all alone.

Hollywood taught us that we have to play the “hard to get game.” While it’s a fun game to watch in the movies, in real life it’s excruciatingly painful for the game player.

The only people who are successful at “playing hard to get” are those with an avoidant relationship attachment style.

Huh?!? What does that mean?

Each of us has different ways of connecting with a potential love interests. Our style of connecting to different people is a learned behavior that develops from the moment we’re born.

People with an avoidant attachment style find being in an emotionally intimate relationship terrifying. As a small child they wanted to connect with their parents, yet they weren’t available enough. After having been rejected enough times, they developed a thick skin and decided they wouldn’t allow themselves to feel hurt like that again.

Like everyone else, an avoidant persons DNA tells them they should want to connect, yet every time they get too close, something fires in their brains and tells them that getting too close is a danger zone. As soon as things get too hot to handle, they jump away and sabotage the relationship.

Yoni, isn’t avoidant, as he craves relationships. His situation is different. He has what relationship experts call an anxious attachment style. In Yoni’s case, when he was little, he got a taste of what love felt like and he liked it a lot. The problem is that it wasn’t present or consistent enough. As a result of not receiving love on a constant and regular basis he learned that he had to do something to earn love.

Yoni got the message that love wasn’t a given and that sometimes it could be risky. In order to receive love he had to be deserving of it. The other message he received was, “if someone loves me, there must be something wrong with them.” This was because the people closest to him, didn’t show him the kind of love he really needed.

For Yoni, going for someone he couldn’t get produced a feeling of excitement. The excitement was that familiar feeling he had as a small child. Even though it wasn’t a good one. It makes him want to do whatever he could, even at the expense of his dignity, self-respect and pride, to keep an unsatisfying relationship going.

Fear of abandonment is especially great in people who experience avoidant attachments. But for them, rather than taking a chance on another heartbreak, they’re always the first to pull the pin on the relationship. This is because they gave up on love a long time ago. They don’t even kid themselves that it may be a strong possibility.

Many avoiders may still try to get into a relationship, but most fail, time and again, finding reasons it won’t work.

So how does this all connect with taking a relationship risk and sharing how you feel? Everything!!! By enabling yourself to be open and share your feelings with your bf/gf you’re testing the situation to see whether they have what it takes to handle love.

If your feelings drive them away, then it’s a pretty good indication they don’t have what it takes to be in a long term relationship.

If they go running, because you shared your feelings first, let them go. The response of a potential relationship committer should be something like, “Wow, I’m so flattered. I’m not quite there yet, but I really see the potential here and would like to give this a chance.”

So the next time you question whether to take the risk and share your feelings with someone, ask yourself the following questions:

1) Does this person actually make you feel good and comfortable with yourself?

3) If this person doesn’t respond positively, what might this tell you about their ability to connect with you?

By answering these questions you may save a lot of time chasing after someone who may never be ready, or it may bump up your relationship to the next level.

Either way, you win!

If you feel unsure about where you stand in a relationship, drop me a line and let me know how I can help you out.

If you know someone who is petrified about taking a relationship risk feel free to share this with them.